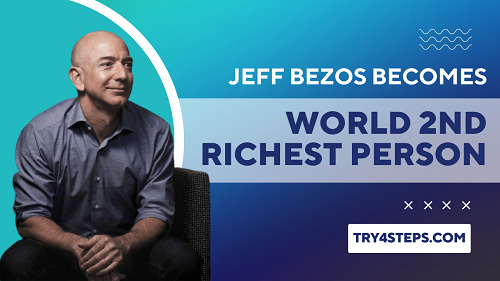 Gautam Adani, who was just named the world’s second richest person, has been surpassed once again by Amazon founder Jeff Bezos, and he is now ranked third.

Gautam Adani recently bought Ambuja Cement and ACC Cement, which resulted in a significant boost in his wealth, propelling him to the second richest person on the planet, surpassing Amazon CEO Jeff Bezos.

However, the Adani Group’s share price has lately plummeted, and Gautam Adani has reclaimed third place on Monday. Despite the fact that he is still Asia’s richest person.

Adani Group lost $6.91 billion owing to the collapse of Adani’s shares last Monday, reducing Adani Group’s net value to $135 billion, and as a result, Jeff Bezos, whose total net worth is $138 billion, has taken over Gautam Adani and become the second richest person.

Mukesh Ambani, the founder and CEO of Reliance Industries Limited, has also dropped out of the Top 10 list. Their removal from this list is also due to a drop in share price.

Mukesh Ambani now ranks 11th among the world’s wealthiest individuals and his total Net Worth is now becomes to $82.4 billion.

According to the Bloomberg Billionaires Index, Gautam Adani is the only billionaire out of 14 in the world who has not suffered any losses since the beginning of the year.

According to the Bloomberg Billionaires Index study, Adani Group made a total profit of $58.5 billion in its net worth this year, whereas Elon Musk and Jeff Bezos had significant losses of $25.1 billion and $54.3 billion, respectively.

According to the IIFL Wealth Hurun India Rich List Report, Adani has surpassed Mukesh Ambani to become India’s richest person. Perhaps you would be astonished to learn that Adani is currently generating ₹1600 crores every day.

According to the IIFL Wealth Hurun India Rich List Report, Gautam Adani’s wealth was one-sixth of Mukesh Ambani’s wealth in 2012, but Adani subsequently put Mukesh Ambani well behind, with a ₹3 lakh crores gap in net worth.

All of the information in this post is gathered from the Financial Express website financialexpress.com, so if you have any questions or want to learn more about this report, simply click on the provided link.

For more such finance related news visit daily to try4steps.com for latest updates.

Q.1 Who is at the top of the IIFL Wealth Hurun India Rich List report 2022?

Q.2 Who will be the world’s second richest person in September 2022?

Q.4 What is Gautam Adani’s total net worth in September 2022?

Ans. Gautam Adani is the world’s third richest person after a $6.1 Billion loss in the stock market on Monday, and he now has a total net worth of $135 Billion in September 2022.

Axis Bank, India's finest private bank, has announced that it is investing in Go Digit Life, a major insurance provider...

Do you know guys our favorite Search Engine Google is on today celebrating the 140th Birth Anniversary of a great...