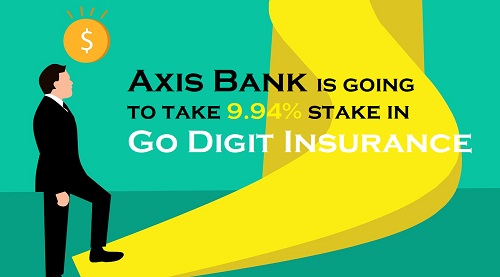 Axis Bank, India’s finest private bank, has announced that it is investing in Go Digit Life, a major insurance provider in the country.

This news was announced by Axis Bank on Tuesday, September 27, 2022 when when he stated that the bank would sign a deal with Go Digit Life Insurance, and after this agreement Axis Bank will invest an amount between ₹49.90 crore and ₹69.90 crore in Go Digit Company.

This investment of Axis Bank’s investment will be divided into two parts, after which Axis Bank will become a shareholder in this Go Digit Life Insurance company with a stake of up to 9.94%.

This is not the first time that Axis Bank has decided to invest in Go Digit Life Insurance company. Prior to Axis Bank India’s largest private sector bank ‘HDFC Bank‘ announced last month on 25th August, 2022 that it will purchase a 9.94% share in Go Digit company.

These two banks’ actions will help to increase the potential of this Go Digit Life insurance firm. Let me tell you that Go Digit’s general insurance business has halted the Initial Public Offering [IPO] of Go Digit Life Insurance for the month.

Fairfax Group, owned by Canadian billionaire Prem Watsa, is also backing Go Digit. The notification of Go Digit’s IPO suspension was issued by India’s ‘Watch Dog,’ the Securities and Exchange Board of India, popularly known as SEBI. However, SEBI has not stated the cause for the cancellation of Go Digit Life Insurance’s Initial Public Offering [IPO].

Ans. – Axis Bank would invest between ₹49.90 crore and ₹69.90 crore in Go Digit Company, acquiring a 9.94% share in the company as a result of two phase of transaction.

Q.2 – Which Institution has stopped IPO of Go Digit Company?

Ans. – The Securities and Exchange Board of India [SEBI] which is also called as Watch Dog of India has stopped Initial Public Offering of Go Digit Company.

Ans. – India’s Largest lending Private Sector Bank HDFC Bank has said last month that it will take a stake of 9.94% in Go Digit.

NOTE – All these information is taken from the official website of financialexpress.com and if you have any doubt in the given data above then you can read full article from the link which is provided above.