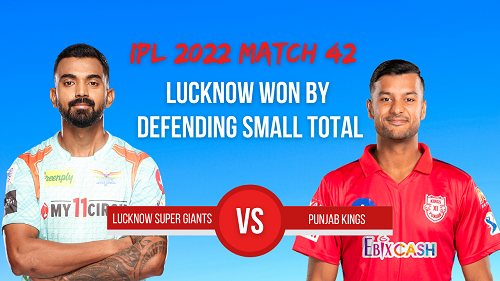 Unfortunately once again Punjab Kings Lost by his luck

Friends, you must have heard about Punjab Kings last year’s IPL, when Punjab Kings needed only 4 runs to win in one over, but Rajasthan Royals player Riyan Parag easily defended 4 runs in 1 over. That is why many people believe that the luck of Punjab Kings is very bad in IPL.

We got to see the same in yesterday’s match when Punjab team bowled first and stopped Lucknow Super Giants for 153 runs and the innings started well but gradually the players of Punjab Kings went out, due to which once. Then Punjab Kings had to face defeat.

Punjab Kings won the toss and decided to bowl first and that proved to be good too. Punjab Kings restricted Lucknow Super Giants to 153 runs in which Punjab Kings bowler Kagiso Rabada took four wickets for 38 runs in 4 overs.

KL Rahul, who was in good form, could not score many runs in this match and he soon returned to the pavilion after scoring 5 runs in 11 balls. On behalf of Lucknow Super Giants, Quinton de Kock and Deepak Hooda handled the innings and scored 46 and 34 respectively, due to which Lucknow Super Giants scored a total of 153 runs for 8 wickets.

Rabada got the most wickets in bowling with 4 wickets. On the other hand, Rahul Chahar took two wickets for 30 runs in 4 overs and Sandeep Sharma took one wicket for 18 runs in 4 overs. Arshdeep Singh, who was in good form in many matches, had to be content without any wicket, he conceded 23 runs in 4 overs but he did not take a single wicket.

Run scorer from the side of Punjab Kings in match 42

Batsmen Mayank Agarwal and Shikhar Dhawan, who came to open for the Punjab team, started the innings very well. But Mayank Agarwal got out in the fourth over and after Mayank Agarwal’s dismissal, the whole team slowly went back to the pavilion. Jonny Bairstow and Mayank Agarwal scored the most runs for the team with 32 and 25 runs respectively.

The bowler of the same Lucknow Super Giants bowled very well and soon the player of the Punjab team was dismissed, on behalf of Lucknow Super Giants, Krunal Pandya took two wickets for 11 runs in 4 overs, which also included a maiden over. For the same team, Mohsin Khan took 3 wickets for 24 runs in 4 overs and his spell also included a maiden over.

Due to good performance of Krunal Pandya, he was adjudged the player of the match as he bowled 1 maiden in 4 overs and also took 2 wickets and that too for just 11 runs.

What is the position of Lucknow Super Giants in Points Table

Lucknow Super Giants won this match and secured the third position in the constable Lucknow has played total 9 matches so far out of which they have won 6 matches and lost 3 matches.

After winning yesterday’s match, Lucknow has slipped from fourth position to third position and with this win, Lucknow Super Giants have 12 points and run rate of +0.408.

Let us tell you that in IPL 2022, only the top four teams will enter for the quarter-finals, for which each team will need at least 16 points, currently at the top is the Gujarat Titans, who have played only 8 matches, out of which they have won 7 Won matches and have 14 points now and run rate +0.371.

Rory McIlroy, motivated to win first major in eight years Rory McIlroy who is one of the best player of...