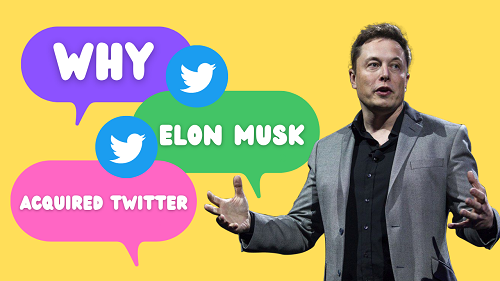 Do you know guys, a very popular Social Media platform Twitter is now bought by the world richest man. As we all know that today, worlds richest man is Elon Musk and he has acquired Twitter and now he becomes one more company owner.

Let me tell you that Elon Musk is already Chairman and CEO of Tesla and SpaceX and now he has bought another Social Media platform twitter.

Now the question comes in the mind of everyone that why Elon Musk has bought Twitter? What is the reason behind this deal? So I wanted to tell you that he has acquired twitter because he is not happy with its terms and conditions of handling twitter.

Do you know guys in what amount Elon Musk has bought twitter? So let me tell you that he has acquired Twitter Inc. for $44 billion which is a very huge amount.

Do you know that there are some rumors are going trending that the current CEO of Twitter is Parag Agrawal will not be available as the CEO of twitter.

I know now you have a query that why Elon Musk has to pay him this amount? It is due to the term & condition set by the company that any one who is the CEO of twitter who was wanted to remove by the chairman then, If he has completed its one year period then the chairman can change him/her without any restriction but if he/she has not completed minimum one year period then he/she must have to give a huge amount of money if the chairman wants to change to position of Chief Executive Officer [CEO].

According to Bloomberg’s news, although Elon Musk has acquired twitter but the current CEO and chairman is same i.e. Parag Agarwal (CEO) and Bret Taylor (Current Chairman).

The main reason behind acquiring twitter is that from last many weeks Elon Musk was not satisfied with its terms and condition and also some twitter post of Elon Musk was deleted by the twitter handle that is why he has decided to acquire this social media platform.

Elon Musk has also said that there are some restriction on posting tweet before acquiring twitter but now everyone can write anything and all are independent and no post will be delete.

When everyone who is in the favor of Parag Agrawal and he is saying that this is a bad decision taken by the owner, the former chairman and CEO Jack Dorsey has said that he (Elon Musk) is the ‘Singular Solution’ for twitter and he has dropped a lot of tweets in favor of Elon Musk.

Twitter has announced on Monday about its sale to Elon Musk in $44 billion. Under this deal Elon Musk will give cash of 54.20 US Dollar to each share holder who have taken its share.

Now I think this is a great deal and with this action twitter will again be a right place for everyone where they can share all right news without any restriction and no one will delete post if it will be right.

One thought on “Why Elon Musk Acquired Twitter? Get the answer here”

Do you know guys our favorite Search Engine Google is on today celebrating the 140th Birth Anniversary of a great...