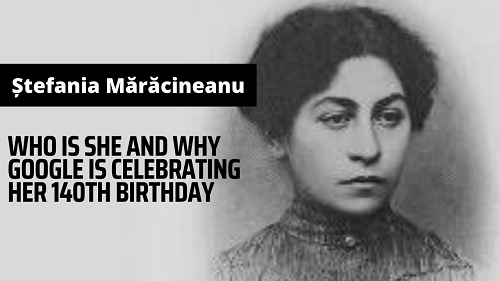 Do you know guys our favorite Search Engine Google is on today celebrating the 140th Birth Anniversary of a great scientist Ștefania Mărăcineanu.

In 1910, she graduated from the Central School for Girls, Bucharest in the field of Physical and Chemical Science.

Here she got a scholarship from the Romanian Ministry of Science. After this she decided to pursue research at the Radium Institute, Paris.

As the search of Radium by Madam Curie, The Radium Institute was become a worldwide centre for the study of Radioactivity under the guidance of Madam Curie. Ștefania Mărăcineanu started there her PhD on element Polonium which was earlier discovered by Madam Curie.

When she started researching on Polonium’s half life she gets a result that Polonium’s half life is depends on the type of metal in which it is placed. From this result she surprised because if alpha rays from the Polonium atom transferred some atoms to the metal to convert into Radioactive Isotopes. This research of Mărăcineanu becomes the example of the first artificial radioactivity.

She is the first person who discovered this artificial radioactivity but In 1935, the daughter of Madam Curie, Frederic and Irene Joliot-Curie had won the Nobel Prize for the discovery of Artificial Radioactivity, although it was the discovery of Mărăcineanu but they had not mention her name in this.

After this Mărăcineanu publicly claimed that she is the real discoverer of Artificial Radioactivity and she discovered it in Paris when she was researching on Polonium.

Why google is celebrating 140th birth anniversary of Ștefania Mărăcineanu

In 1936, Mărăcineanu written a letter to Lisa Meitner about her discovery and how Irene Joliot Curie has steal most of the work without her permission and without knowing her and mainly the work of Artificial Radioactivity. Mărăcineanu has mentioned this incidence in her book “A devotion to their science: Pioneer women of radioactivity”.

In December 21, 1937 she was become the Director of Research in Romanian Academy of Sciences and in 1941 she became Associate Professor there.

In the year 1942 she had to taken mandatory retirement from her work. She died in 1944 due to cancer which was caused by radioactive exposure.

I hope guys you have read about a great scientist in the field of physics who have given all her life in research and I hope we will understand how much study is important for us.

So keep studying hard to achieve great success like Ștefania Mărăcineanu. Thank you Google for remembering this day.

Do you know guys, a very popular Social Media platform Twitter is now bought by the world richest man. As...